Augustine beyond the Book. Intermediality, Transmediality and Reception 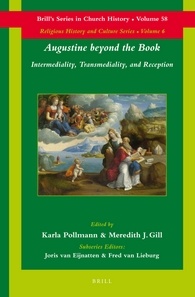 Augustine of Hippo (354-430) is arguably the most influential thinker and Latin author of the Early Christian period. His widespread legacy has been explored to date only in part, and largely with respect to his textual reception. This interdisciplinary volume attempts to redress this emphasis with a set of analyses of Augustine's impact in the visual arts, drama, devotional practices, music, the science-faith debate and psychotherapy. The included studies trace intricate and occasionally surprising instances of Augustine's ubiquitous presence in intellectual, spiritual and artistic terms. The result is a far more differentiated and dynamic picture of the mechanisms by which the legacy of an historical figure may be perpetuated, including the sometimes supra-rational and imaginative dimensions of transmission.

Pablo de Felipe (Madrid), The Antipodeans and Science-Faith Relations: The Rise, Fall, and Vindication of Augustine